Still sick, still busy, sorry to post a repeat but it is from so long ago I doubt anyone now reading has seen it. Thanks! — Demi

This blog is a bit difficult for me to write as I keep getting sidetracked over delightful images. I certainly hope my keyboard is waterproof. I especially drooled over a clip from Beau Brummel – This Charming Man, starring James Purefoy. Sincere thanks to Kristen Koster for posting that delectable eye candy here.

I’ve never been a big fan of the Georgian era, the powdered wigs, and overly decorated coats just never struck me as masculine. Dangerous Liaisons changed my mind about that, followed by Rob Roy and somewhat by Amadeus. And of course, the ordinary day coats were simpler than the court and fancy dress suits. France, as was her wont, set the styles and dictated what was beautiful. Full-skirted styles for both men and women came into high fashion, made from velvet, silks, and satins. The hues of the fabrics were brilliant and varied.

In addition to this style for clothing, the style for a man’s body was to look as thin and straight as possible. Think Ichabod Crane. According to Eras of Elegance (http://www.erasofelegance.com/history/georgianlife.html) prevailing mode included braid, embroidery, and buttons of gold, silver, or jewels.

Of course, a man did not wear his powdered wig all the time. Beneath, his hair was normally about shoulder length, pulled back into a ponytail tied at the back of the neck.

The Regency period took steps closer to the modern business suit. While the coat was still long, the colors became more subdued, especially as The Beau became more important to fashion. Men became subtle and subdued and still remain so today in most respects. Evolving from the Country Attire and riding outfits of the late 18th century, and rebelling against the excesses of French fashion, men’s clothing became tight, showing off the masculine form without restricting movement.

Jane Austen’s World (http://janeaustensworld.wordpress.com/2013/06/21/regency-fashion-mens-breeches-pantaloons-and-trousers/) has wonderful information on the differences in station, activity, and the changes over time of the period. The illustrations are wonderful!

Also, hair for men now became more natural. No powdering, no wigs, and no queues. Instead, short hair, curled if it would, and brushed forward over the forehead. The popular influences were the Romantic poets, notably Byron. As much hair as was available, the gentleman brushed it forward to appear like Cesar, wearing a laurel wreath. Or if long, thick hair could be had, it was brushed carelessly into curls around the face. See Jessamyn’s Regency Costume Companion for illustrations. (http://www.songsmyth.com/menhair.html) 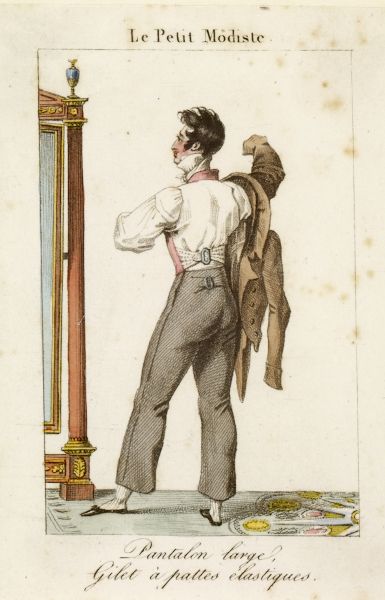 As to facial hair, sideburns were required. No man would seriously shave his cheeks. According to Jane Austen’s World (http://janeaustensworld.wordpress.com/2012/08/25/mens-hair-styles-at-the-turn-of-the19th-century/), men tried to look like the Greek marble statues being imported to England. No beards or mustaches were depicted on the statues, so few men wore facial hair of any sort. 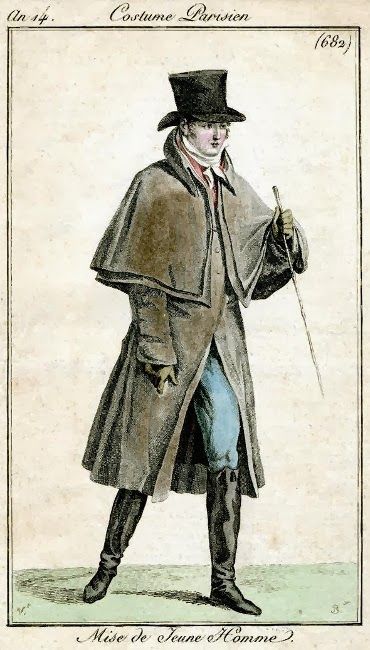 Shoes, stockings, and gloves were required, though boots were very much in fashion and use in the country and in riding. Cravats deserve their own page, but I have to point out that Beau Brummel is said to have ruined 6 or more freshly laundered and pressed neck clothes each morning before reaching a satisfactory tie. I believe The Beau was a particularly fastidious person, not the norm for the time. And I hope we are past the era of Regency Heros who go through a mountain of linen in emulation of this style. Do read the Neckclothitania, a satirical catalog of the various popular knots. (http://homepages.ihug.co.nz/~awoodley/regency/tie.html)

A side note, there are many tropes in Regency romances, and my novel does rely on one. However, I believe I have a fairly interesting twist on it. But when I first discovered this genre and read as many as I could get my hands on, I started seeing these patterns and thought I would someday write a total satire. The Hero would go riding in Hyde Park very early in the morning, expecting to be alone, but find the park crowded with other heroes doing the same thing. The Heroine would go to Hatchard’s for a book and find the bookstore impossible to enter because all the other heroines were there.

In general, the Regency period led to improved health, but mostly for the well-to-do. The Georgians did not bath very regularly and did not wash those expensive velvets. But the increase of cotton linens and an improvement in personal cleanliness led overall to healthier people. Some types of food were expensive, but for the most part, one could find plenty to eat if one’s appetite was not too nice. And more than ever before or since, people walked.

Men were expected to be, if they were in the upper circles of society, excellent horsemen, bruising hunters, possibly students of Gentleman Jackson’s boxing academy, and probably involved in wagers regarding their own abilities to ride or walk a set distance in a set time.

I direct you to a page at LikeBooks (http://www.likesbooks.com/regent.html) where, if you scroll down a bit, you will find some words about Beau Brummel. Granted, he did not reign over the fashionable world for very long, but he had a lasting impact that still is seen today. He remains one of the best-known figures of the Regency period and very clearly sums up the Ideal Male of fashion.